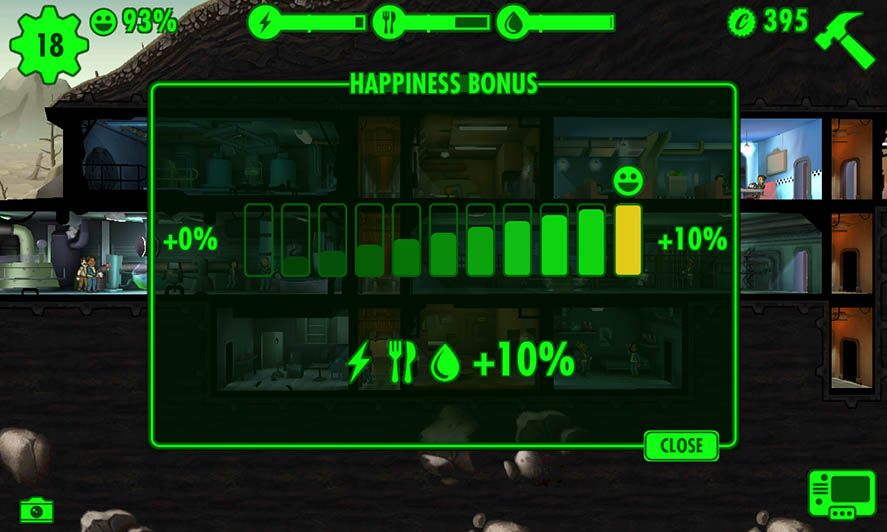 Surviving in a post-apocalyptic world is complicated what with all the radroaches and bottles of radioactive Nuka-Cola. To make the experience more manageable we’ve created this basic guide to prospering on Fallout Shelter, the strategy and management game for iOS and Android in the same setting as the popular saga. Even though its game system is quite simple, if you don’t plan your shelter well in the first few hours of the game it could cause you big problems later on.

What rooms you should build first

You should be clear from the beginning on the fundamental pillars around which the whole game revolves to make your shelter prosper and offer consistently good results. There are three fundamental resources to keep in mind and these are each generated from a particular type of room: energy, water, and food. The first of these is the most important, as the bigger your shelter, the greater your energy requirements, and if you don’t reach the necessary minimum the other resources will be disabled. Thus you should follow a certain construction order that also follows your own progress: to construct advanced buildings you’ll need a minimum population (or number of dwellers, as the game calls them), and for that number to grow you need to do things properly.

For all these reasons, your construction order should first ensure you have plenty of resources: first with an energy plant, then with a water purifying plant and a restaurant for food. The three bars at the top of the screen are your main reference to see how things are going, as you try to keep the levels from falling below the set minimums. Later you can upgrade your rooms to increase their production and the maximum amount of shareable resources.

The next thing you should build are the houses, which have a dual purpose: to expand the maximum number of dwellers in your shelter and to let them pair up so they can have kids and thus make more people to work in your domains. When you get to this point you can start making decisions according to your game rhythm. The warehouse also lets you keep objects amongst the ones you find to send on expeditions to the exterior (more on that below), but for now you should consider those a secondary priority. How to improve the performance of your rooms

Your rooms can be improved by clicking on the arrow at the top right of the screen if you have them marked, thus increasing their production rate, but that’s not the only way to improve their performance by a long shot. For a room to work some of your dwellers have to work in it, but not all of them are equally qualified for each job. Clicking on any of your dwellers will display their S.P.E.C.I.A.L. points, according to which each character is associated with an individual intrinsic characteristic.

When you mark a room, you’ll see a letter with a circle around it in the lower part, corresponding to the skill a worker needs to do that particular job. Thus if you want to assign dwellers to the purification plant you’ll need to look for the ones who have the P (perception) characteristic up to a certain level. It’s also possible to upgrade characteristics by dressing the dweller in special clothes or training them in rooms for that purpose that will be unlocked further on. Another way to increase performance in the rooms is to use express mode, which is simply an option to ‘force the machine’ to produce resources instantly. The problem with this is that there’s a chance that the maneuver could go wonky, causing a fire in the room that will take health away from the people in it. The more you abuse this mode in a short period of time, the greater your risk of this happening.

Finally you have to keep in mind the size of the rooms, as if you build two of them of the same size they’ll merge into one, and can be expanded to up to three times their size, lightly improving their production levels along with it. That said, the rooms won’t merge if they’re not updated to the same level. How to make your dwellers happy

Your shelter’s performance depends in part on the happiness of its dwellers, which will vary depending on a series of values. The most important one is for basic necessities, meaning if you don’t have enough electricity, water, or food the values will drop dramatically. Your dwellers will also grow sad if you set them to work on something that doesn’t interest them (ignoring their appropriateness for the job as measured by the aforementioned SPECIAL system), and of course, they’ll be quite unhappy if you opt for express mode and the room ends up in flames. Their happiness also increases when a couple has a baby. For nature to work its magic all you have to do is place two dwellers of the opposite sex in a room. After a certain time (which will depend on each of their levels of charisma), a happy little boy will appear who within a few hours will be yet another grown man that you can put to work.

How to do expeditions

You can send any dweller out to explore the terrain and return with bottlecaps (the currency in the game) or equipment in the form of weapons and armor found on their trek. To do so, you just drag the character outside the shelter. Keep in mind that their expeditions will take place in real time; you can monitor them through a log accessible in the general list of dwellers that you can access at any time in the upper left part of the screen. For an expedition to be successful you should send someone who’s well-equipped and has a few levels behind him, as that will increase his life levels for a hefty trek. But nor do you have to suffer too much if he ends up falling into combat, as you can ‘revive’ him by paying a few coins, although you won’t get any of the loot collected on that expedition. To give you an idea, a level 10 character with a weapon that takes around 10pv could survive some three hours in the exterior without getting too disheveled. Keep in mind that the character has to come back, though, so at a certain point you’ll have to calculate if they’ll survive the return at the observed rate of life loss. The return usually lasts a bit longer than half as long as the time out. This time can be considerably increased if, before you send a character out, you give him stimulants (to increase his lifespan) and RadAway (to get rid of the radiation that does the greatest damage to his lifespan). You can get these resources by building a hospital and a laboratory, respectively.

One of the best ways to quickly get resources is by fulfilling the objectives the game sets for you, which are totally optional but which once achieved will give you bottlecaps or the much-loved lunch boxes: packages that contain four letters that in turn will give you resources and objects in bulk. If the objectives don’t fit your level in the game (for example, asking you to move up a SPECIAL range but you still don’t have the rooms to do it), you can discard them to get different challenges, although you can only do this once a day. In terms of the shelter itself, the remaining rooms that you unlock will simply expand the initial gameplay and supplement the same features with advanced elements. The radio studio lets you call survivors in the exterior to come work for the shelter and avoid the hassle of mating, with all the wait time that involves to create new workers. You’ll have rooms to increase each of the six SPECIAL characteristics, and eventually you’ll find a nuclear reactor, a garden, a water purifying plant, and the Nuka-Cola bottling plant to increase your energy, water, and food levels.

Your vault isn’t safe on any side: it can suffer attacks from all kinds of angles. Sometimes you’ll get attacked by bandits from the exterior that can take resources or even kill your refugees. To protect against them you should always keep a few dwellers with weapons in the rooms adjacent to the entry. A good way to keep alert is to have a spare pair of weapons in your warehouse and assign them to the room being invaded by the bandits.

Other common problems include fires and attacks of radroaches that come out of the ground. The first are automatically resolved if there are dwellers in the affected room who put out the fire with extinguishers, losing a bit of life in the process. With the radroaches you have to be rather more careful: since they can only be gotten rid of with fists, if there aren’t enough dwellers in the room to get rid of them the radroaches can multiply throughout the entire shelter and devastate it.