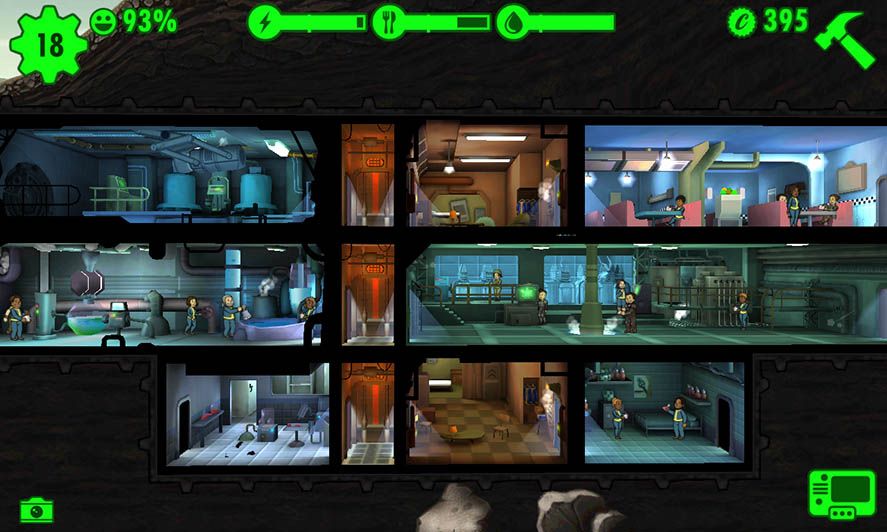 During the last 3E, Bethesda was so kind as to present the iOS version of Fallout Shelter, and just last week they did the same for Android: in this strategy and resource-management game set in the Fallout universe you have to manage the expansion of your underground Vault-Tec shelter and assign tasks to its inhabitants to survive in the wasteland amongst the radroaches, Nuka-Cola bottlecaps, and mutant experiments.

Dissecting the game to its most basic, it’s true that what we have here is the usual – a community-construction game where you can expand your operations bases with different items as you gather resources and wait an ever-increasing number of minutes before checking your smartphone to see how your progress is going. But the shadow of Pip-Boy is long, and any fan of the saga will massively enjoy the look of the game and countless winks to all the Fallout titles, including references to the imminent Fallout 4. There’s a certain appeal in experimenting with your underground shelter, where you have to construct a series of rooms with functions as disparate as serving as an energy source or feeding your population. Along the way you’ll assign tasks to the poor post-nuclear wretches who want to access your Vault, and you can upgrade their skills, equipment, and make them have amorous encounters along the way to ensure their legacy, as here the storks don’t bring babies. If you can keep your energy, water, and food away from the bad guys you’ll grow to the point that you have more than one settlement to manage – basically seeing the same gameplay as from the days of Travian and other browser games. As soon as you get properly stuck in you’ll be spending the entire day sending your settlers into the wasteland so they come back with valuable resources and solving the messes that arise amongst your population, whether due to romantic escapades or radioactive emissions that cause mass poisonings. As I said: a complete delight.