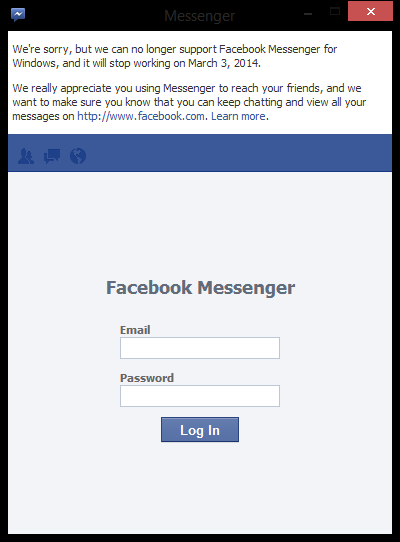 Although initially launched exclusively for mobile devices, Facebook Messenger arrived in a desktop version in March 2012 to allow users to access the social network’s chat feature and see your friends’ latest updates without having to access the web. More than two years afterward it’s suddenly been announced that it will no longer be available from March 3, 2014. Is Mark Zuckerberg making his opening gambit for his future plans? Although on paper it seemed like a good idea, only after the application was fully redesigned in late 2013 to make intelligent use of chat bubbles did Facebook Messenger achieve a higher level of success. What nobody expected is that the desktop version would no longer be available, to the point that its official webpage has been completely erased, with only the iOS and Android clients available for download.

Starting today, you won’t be able to keep use this program . Is this a first move toward a strategic shakeup in instant messaging after the acquisition of WhatsApp or a logical step in the face of the constant decline in the use of desktop tools in favor of mobile apps?