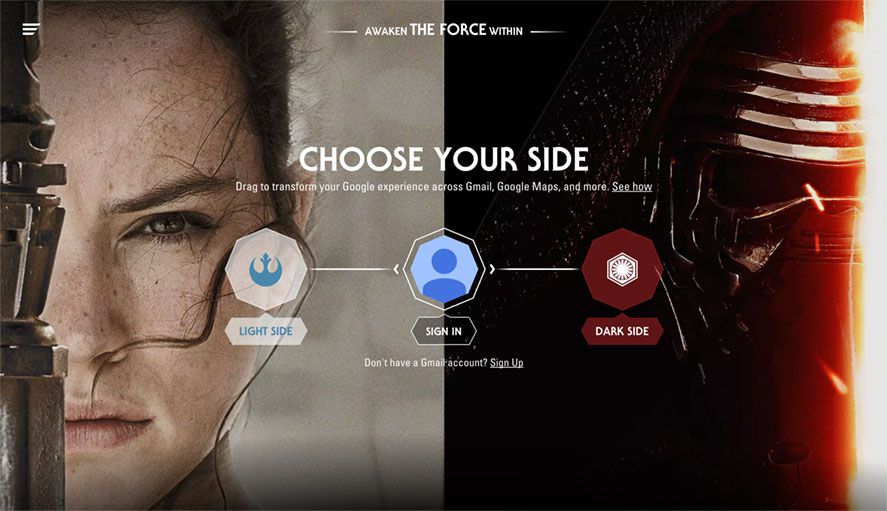 These days surrounding the release of the new Star Wars movie have been dramatic ones, with the Internet spitting out a huge amount of content to help sate the cinematic anticipation of fans. Lots of companies have jumped on the promotional bandwagon, with even supermarkets now offering apples from the Dark Side. In the case of Internet giants Facebook, Google, and Spotify, a flood of campaigns have appeared related to The Force Awakens, letting you get a playlist for a particular character or use your smartphone as a light saber.

Now you can add a light saber to your profile pic on the social network to make it look like a movie poster. You can choose between the Dark Side and the Light Side, obviously. If you’re still itching for more, there’s also a pack of stickers available that you can use either on the web chat or on Facebook Messenger. You just have to open a chat window, tap the icon to add stickers, and then press the plus sign to add that sticker set. In the music sphere, Spotify has a strange webpage (and quite an absurd one, why deny it) where it tells you which Star Wars character you are depending on what music you listen to, offering a custom playlist in reference to which character you get. In the case of your correspondent, listening to lots of glam rock apparently makes one Qui Gon Jin. We have no idea what Liam Neeson would think about all this. Google has gone to great lengths these days with all sorts of related proposals. One of the most noted is the one to customize all your Google services to the Dark Side or the Light Side, changing your YouTube toolbar to a light saber and even the little Streetview man for a Stormtrooper. Not content with that, Google has released an experiment via Chrome that lets you use an Android device as a light saber that interacts with the objects that appear on the screen of your desktop computer.