Home News and Updates The end of support for Windows XP is looming. Now what? 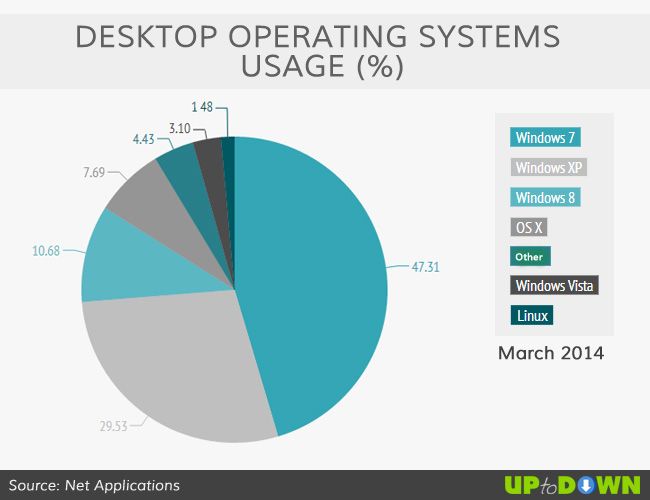 On April 8th Microsoft will officially end support for its antiquated operating system Windows XP after nearly 12 years in operation, and no further system updates will be issued. If you are among the enormous percentage of users who are still using it, now is the time to plan an alternative. These are your options for bringing yourselves into the Modern Age.

What will happen with Windows XP now?

This end date does not mean that Microsoft will completely “pull the plug.” Computers with Windows XP will keep working as usual, only there will no longer be periodic updates, meaning that possible vulnerabilities and bugs discovered from here on out will not be resolved, at least not officially. Nevertheless, the company has announced that malware detection updates will continue to be released through June for those who aren’t on the ball with these things.

The other main reason for the shelving of the operating system is more subjective: many developers from now on will not provide support for Windows XP in their programs, and at the hardware level compatible drivers are being phased out.

Ways to update to modern versions of Windows

Microsoft currently only offers the possibility of buying or updating Windows 8 in its various forms on their official webpage. The basic version of Windows 8 costs $/€119.99, and lets you update both Windows XP and Vista, while the Pro version costs $199.99/€279.99. On the other hand, there is a special version for students at a reduced price. In all cases, once you’ve installed it, you can later update to Windows 8.1 at no additional cost.

No matter which version you opt for, these are the technical requirements:

That being said, if you’re not convinced by the latest version of the operating system it’s perfectly possible to also update to Windows 7 by buying a digital license from any online shop. The requirements are practically the same as for Windows 8.

If your computer doesn’t meet the aforementioned requirements it may not be worth it to upgrade to a Windows OS, in which case you can always turn to Linux when it comes time to revamp your operating system. There are many distributions designed to run on modest computers. Although there is still a lot of prejudice when it comes to using the open-source software, most operating systems based on Linux have a windows interface similar to that used in Microsoft products, so the process of adaptation shouldn’t be too traumatic for anybody. Some interesting alternatives could be Xubuntu, Lubuntu, Linux Mint, or Elementary OS. There are many guides to help you proceed with their installation. Here on the blog we’ve already explained how to run Linux alongside Windows on the same machine and how to install a distribution from a pendrive, and have offered tips on how to fine-tune your operating system after installation.