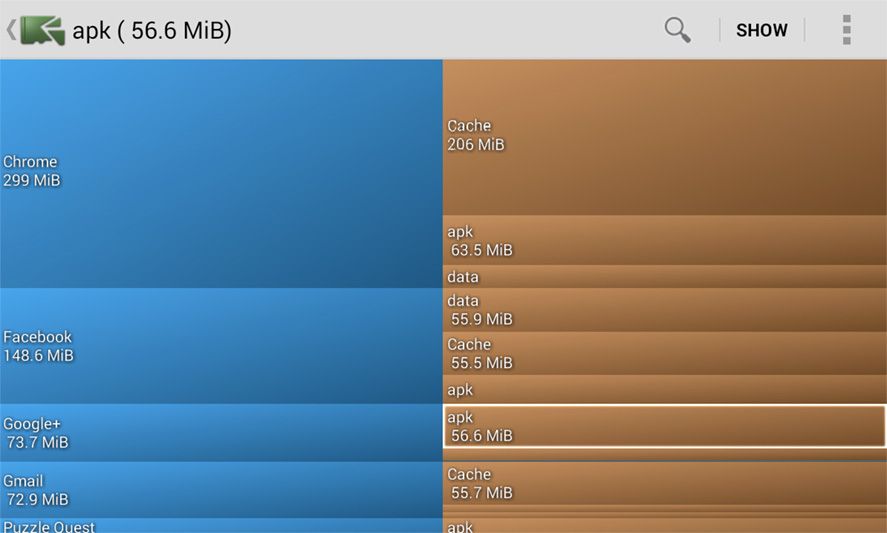 The file system on your Android device is a mystery to many, as you can’t know for sure exactly how your memory is being divided between system elements, multimedia content, and temporary files generated by your apps. DiskUsage is a free app that visually displays the space taken up by each service or app in a schematic form.

When you launch the app it will do a scan of the content on the smartphone’s memory, whether internal or on an SD card. After a few seconds you’ll be able to browse the graphic, made up of a series of columns that subdivide each content block into different sections showing exactly how much space each item is occupying. The next image speaks for itself. The leftmost column displays the total amount of internal memory, and the next preliminary breakdown, showing the space taken up by apps, multimedia files, system processes, and the amount free. When you expand, you’ll find the name and space taken up by each installed app, divided up by the size of the APK itself, the cache, and the data stored by the program to facilitate its operation. One important visual feature of DiskUsage is that it orders the blocks from biggest to smallest, meaning in the upper part of each column you’ll see the apps that take up the most space and can quickly detect the presence of any problems or any services that are more “inflated” than they should be.

DiskUsage isn’t the only app that uses this display system, with the freeware Windows program WinDirStat offering a similar schema, only in this case each block corresponds to a subfolder in the file tree of the drive you’re analyzing.