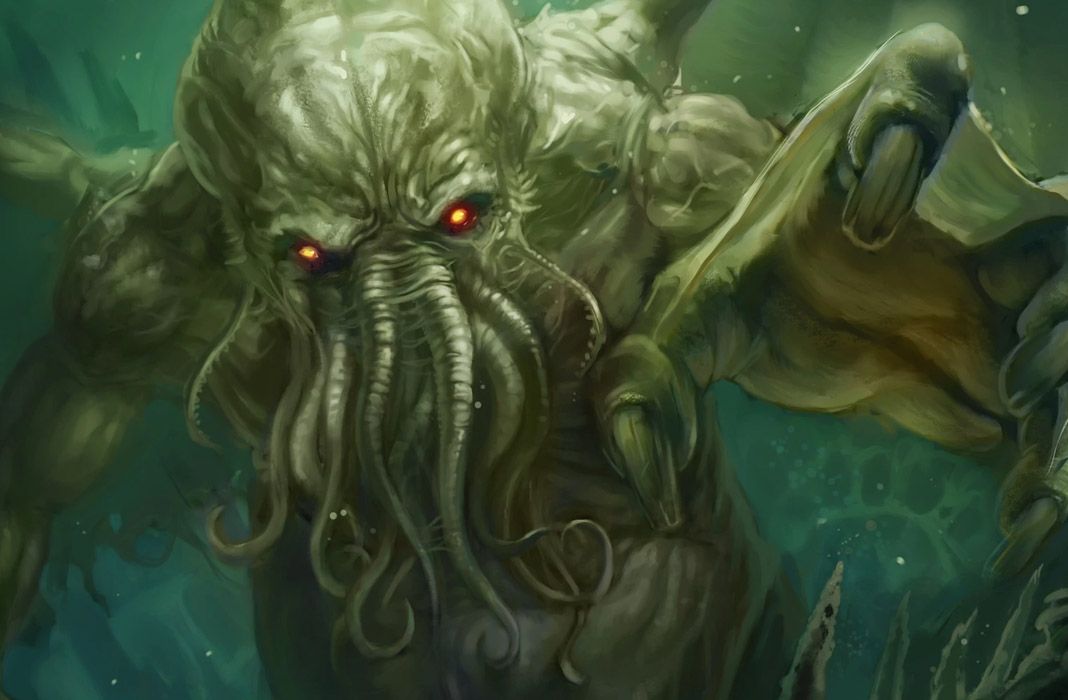 Ph’nglui mglw’nafh Cthulhu R’lyeh wgah’nagl fhtagn! Ahem. Sorry. No, I wasn’t choking on my tongue there. Bad jokes aside, talking about the Cthulhu Mythos game is talking about one of the most important collections of horror literature in history. Stories where monstrous gods older than time itself spy on our reality and attack our sanity. This isn’t your traditional horror – more like fear of the illogical, of that which surpasses human thought. The popularity of the Cthulhu Mythos has grown inexorably with the passage of time and, like anything these days, it now boasts its own transmedia empire of related products. And obviously some of them are video games. One of the oddities of the texts started by the writer Howard Phillips Lovecraft is that they’ve grown beyond him. There are works done by loads of writers who’ve been captivated by the seed planted by Lovecraft. But the various attempts to take these cosmic horror tales off the written page haven’t always been successful. Very few films and very few games have the honor of doing justice to the myth. That’s why lots of non-horror cultural output takes elements from the saga and implements them. Like many games that we’ve selected for this article, where we offer 10 free Android games based on Lovecraft’s world. Enjoy the mashup of green tentacles and sacrifices.

Cthulhu is a huge being more than 10 kilometers tall with an octopus-like head, a scaly dragon-looking body, and wings on its back. This practically indestructible creature dominated Earth from the depths of the ocean. And now you have to take care of it! Cthulhu Virtual Pet is a sort of Tamagotchi where you have to keep the different happiness, energy, health, and hunger bars for your pet up very high. With a cutesy look and graphics inspired by original Game Boy games, we’ve got a pleasant game that gives a funny makeover to your standard pet-care games. It has a good few minigames, too, though it must be said that most of them don’t have a huge amount of appeal. [Download] Graphic adventures are a genre where the Mythos tales have indeed had a more faithful representation thanks to their text-heavy character. The Terrible Old Man is a classic point-and-click adventure about the short story of that name written by Lovecraft. You can read it here, though I’d advise checking out the game first – which won’t take long, as it’s a small title that lasts just 15 minutes. You might find the aesthetic a bit rough and somber but to me it fits the Mythos tale very well. One might even say it’s one of the few good adaptations that have been done. [Download] One of the commonalities in the different Mythos tales is that there’s always sacrifices involved. This cruel act takes on a relaxed look in Cthulhu Clicker, an incremental game where you have to sacrifice innocents to the Old Gods. But you’ll see nothing of the gloomy depressingness from Lovecraft’s stories. This is actually a G-rated game with a pleasant cartoon look. Lovers of the genre have a game to keep in mind here as the Cthulhu & Co. theme is always appealing. It’s also interesting to see how the different creatures evolve as each new change gets more and more relaxed than the previous one. [Download] The aesthetic of Lovecraft’s oeuvre gives lots of room for a free interpretation of the horrors to be found there. This is due to how cryptic the descriptions are of the beings that inhabit this somber world. Cartoonish looks are thus more common than you might think. This is true of Cthulhu Realms. We’re looking here at an adaptation of the card game of the same name: a title where you have to make your opponent go mad while trying to keep from losing your own sanity along the way. You can face the AI and do eight different campaign missions, but the real fun in this digital card game lies in playing against other people. Sadly, to do so you have to pay. But that doesn’t mean you can’t enjoy the free mode with its many possibilities. [Download] Pinball games tend to take inspiration for their tables from all sorts of different themes, and the maestro Lovecraft’s works are no exception. Arkham Pinball fully immerses you in the fictional town of Arkham, Massachusetts, and it’s there that you have to do what you usually do in pinball games: hit the ball and get as many points as possible. We’re not going to pull your leg and say that Arkham Pinball is a great game. It’s simply a pretty generic and ugly pinball game. It takes its name from Mythos but doesn’t go into too much detail in that regard. It has two tables and, well, not much else. But hey, bet when you woke up this morning you didn’t think you’d end up discovering a pinball game based on a city from the Cthulhu Mythos, eh? One more thing to tell your grandkids about. [Download] Cultist’s pretensions are pretty low. The game doesn’t do loads but the bit it does comes out with lots of charm. Cultist is an homage to the old Game & Witch titles, those popular proto-games from the 80s and 90s. This small game puts you in the role a Cthulhu worshipper whose mission is to collect virgins and sacrifice them on the altar of the tentacled god. All this on a single screen and moving just from left to right while keeping one of the arms of Cthulhu from reaching you. A game that pays homage to the past and really isn’t bad. [Download] A look at the name and the screenshots will surely give you an idea of what kind of game FLAPTHULHU is. And no, you’re not wrong. This is the zillionth clone of Flappy Bird, this time with the Cthulhu itself as star. It’s actually a difficult game that will push your patience to unsuspected limits. I tend to get hooked on games like this and I have to admit that with FLAPTHULHU it’s happened again. It’s made with loads of meticulous details to appreciate. And it’s not a simple “copy and paste” since there’s even an extra mode to unlock by collecting skulls. Its retro visuals are simple but effective. A welcome surprise. [Download] The first great game based on the Lovecraft stories is probably Alone in the Dark. This mythic adventure serves as the basis of the survival horror genre, although the title has aged especially badly because of its 3D graphics. But it’s still the icon from which Mr. Lovecraft draws inspiration. In this dark adventure you play Lovecraft himself and have to explore his own nightmares. It has an appropriate setting and includes a first-person mode with which you can also move through the murky settings. [Download] More card games! This time through a completely different prism and with illustrations that try to get as close as possible to what’s imagined in the Mythos. The Moaning Words is based on the fun “Triple Triad” system that appeared as a minigame in Final Fantasy VIII. The game puts you in front of a square board with nine holes where the cards you deposit have a numerical value on each side. The idea is to be the player with the most cards on the table and this is done by “dominating” the other’s cards. To do so you have to beat the value of the adjacent card. But your opponent can do the same thing so do think carefully about your strategy. You’ll unlock cards as you win and thus can make the best deck possible. Still, you’ll have to sweat blood to win anything as the game is properly difficult. [Download] I gotta tell you I’ve tricked you. I said it was ten free games about the Cthulhu Mythos and it’s not totally true. OK, yes, they’re all free. But Mansions of Madness isn’t a game really. Still, my fingers were burning to write about this Android app, as Mansions of Madness is brilliant at what it does. This app is the perfect complement for the Mansions of Madness game. Thanks to it you don’t need one of the players to be the game director as it takes responsibility for informing you of all the important events that occur during the game. Essential for people who play that board game. [Download]