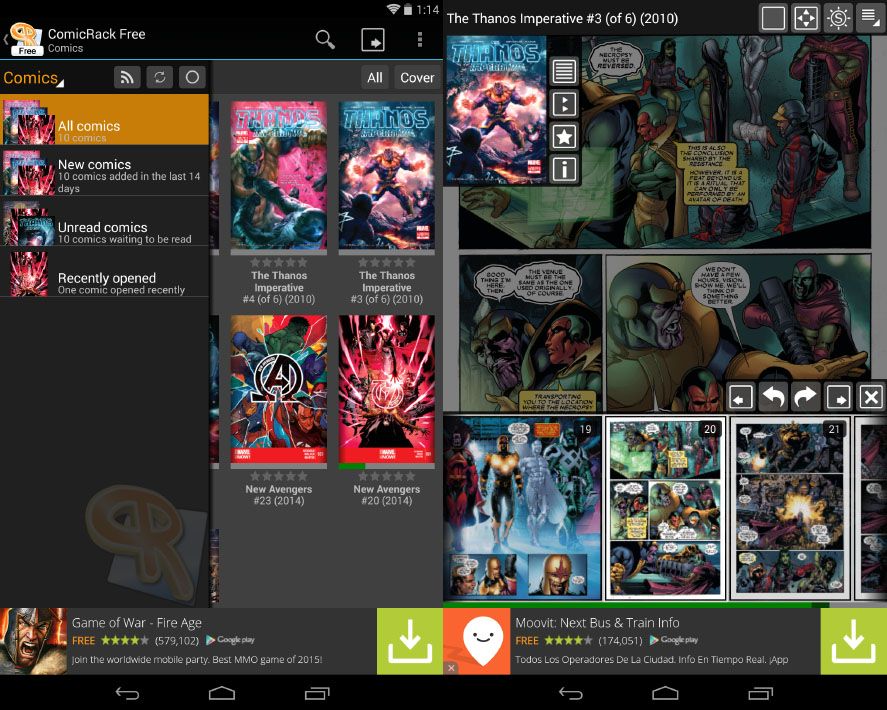 We’ve already gone over which are the best devices for reading digital comics as well as the most complete Android app for that purpose (although we didn’t dig too deep in our discussion of the latter). To bring that thread full circle, here we introduce ComicRack, a free multiplatform tool to catalogue and read comics on your tablet.

If you devour comics, managing your digital collection can get rather cumbersome, especially when you want to read several collections consecutively (which tends to be quite common among the comic publishers with interconnected worlds like Marvel or DC). ComicRack can handle this problem, though, with its very straightforward management options: it can automatically detect which comics you’ve already read to filter them out of your to-read list. Likewise, when you browse through your collection, you’ll see beneath each comic book cover a small progress bar indicating where you left off, even if you close the app and re-enter it later. The app can also organize your comics by file name, elegantly displaying their titles, date of publication, and number within their respective series and unifying all volumes from the same collection into one subfolder, although for this feature to work properly the file names all need a similar structure (i.e. Title-number.cbr).

As this is a multiplatform tool, you can also take advantage of its sync options, choosing from your desktop machine which comics you want to be copied to your smartphone or tablet. You can even automate this process so that only the latest additions to your folders are copied. The app can support any format: beyond the CBR/CBZ standard (which is in fact just a zip file with jpeg images inside it), it can also open PDFs, CB7, DJVU, CBT, and Webcomics.

Although we’ve already agreed that the recommended screen size to replicate the hard-copy reading experience digitally is on a device with a 10.1-inch screen, it’s also true that if the device’s resolution is good enough, you can easily read even on a 7-inch screen, as in the case of the Nexus 7 used below for the attached screenshots, with a colossal 323ppp for a screen with a resolution of 1920×1080.

The viewer lets you completely customize the reading gestures, although by default you’ll turn the page by swiping horizontally in the desired direction. If you tap the central part of the screen a menu will open where you can, among other things, jump to a specific page, return to the main menu, or close the book you’re reading. Another interesting feature is that it automatically detects and centers double-spread splash-pages, that is, two pages that make up a single large image where the CBR file has put them together. If the aspect ratio doesn’t work with your particular screen, the app even does a vertical or horizontal autozoom or adds a plain border in the background in the predominant color of the sketch.

The Free version of the app is fully functional, displaying banners in the lower part of the screen and adding a page of advertising here and there between the comic’s own pages. You can save yourself this hassle with the Pro version, which costs $/€5.00 (you know how clever they are with those exchange rates these days). The Windows version, for its part, is completely free, offering readers the option to make PayPal donations via its official website. The other limitation on the free version for Android or iOS is that you have to connect the device to your PC with a cable to sync the comics, while in the paid version this can be done via Wi-Fi.

And the cherry on top: Where you download your comics from is not our business. (There are lots of volumes out there for free as well as repositories with content to download illegally.) But here are a few tips: The Digital Comic Museum website offers at no cost and completely legally more than 15,000 comics from the golden age (from the ’30s to the ’50s). Likewise, both Marvel and DC as well as their sub-lines offer loads of free volumes.

How to read comics on your tablet