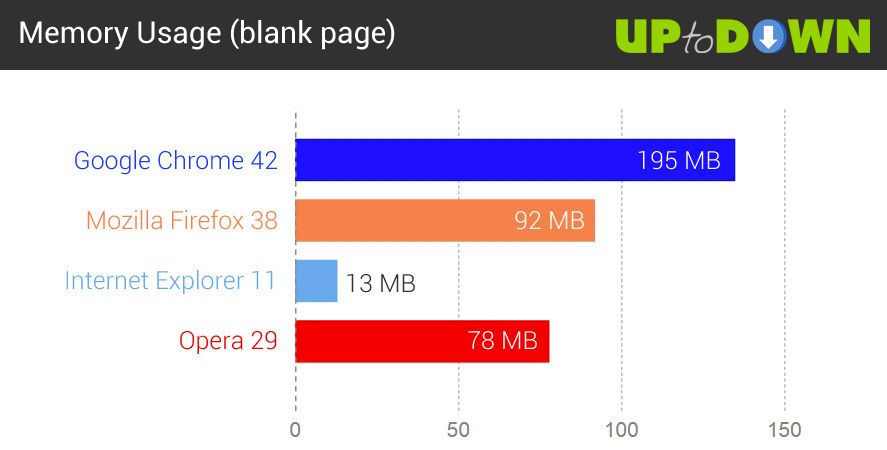 In May 2014 we did a comparison of the four most-used browsers. Now, a year later we’ve done the same exercise with the most up-to-date stable versions of each of the four contenders: Google Chrome, Mozilla Firefox, Internet Explorer, and Opera.

The machine we used for this analysis was a Sony Vaio Intel Core i5 at 2.5GHz with 4GB of RAM and Windows 8.1 x64 recently installed. The laptop is fully optimized and only running the elements essential for startup and good system functioning. The four browsers chosen for the analysis were given a clean install without any add-ons or extensions. These are the versions of each:

The aim of this comparison is to offer transparent info that any level of user can understand. We’re going to break down the review into three main sections: memory consumption, loading speed, and performance, leaving aside the specific features of each for a later article.

A browser’s memory use is an important consideration, especially if you’re short on RAM on your computer. For this section we’ve evaluated browser startup without any pages pre-loaded and with five open tabs (Uptodown, Twitter, Google, Wikipedia, and a blank page). In neither case has any sort of extension or additional add-on been loaded and the memory calculation has been done based on all the processes launched by the browser. The results here haven’t changed over the previous year. From ‘idle’, Internet Explorar 11 takes the lead in terms of its low consumption of resources, since a big chunk of its process are integrated into the operating system itself, meaning the difference in memory after loading is merely testimonial. Accordingly, with five open tabs it’s the one that consumes the fewest resources. What it’s not so great at is freeing up memory after use, such that even after closing it eats up more than 70MB with browser processes. Another peculiar detail compared to 2014 is that the other browsers have considerably increased their memory use from an idle start by almost 20MB each. This info must be assessed in context, as possibly the actual consumption of the Microsoft browser is higher if we take into account the prior loading of programs resident on Windows as well as other temporary files that ‘balloon’ suspiciously, but as noted, the point of this test is to provide easily-understandable information for all users.

Chrome continues to be the heaviest, taking up more than 300MB with the five tabs open. One hundred megabytes more compared to the version analyzed last year! Firefox, for its part, has substantially improved loading and even beats Opera when it comes to loading light.

Startup time has substantially decreased in recent years, and those long waits of up to 15 seconds in the more ‘dramatic’ versions of Firefox on clunkier computers are now long gone. To measure these time lapses we’ve used the free tool AppTimer. In this case, we’ve taken two reference points: one for a cold startup with the system recently started, and another for a later startup after having already run it once, with the latter metric being lower since certain browser elements stay loaded in memory. In both cases Internet Explorer 11 wins again, yet another detail that shows how different the relationship is between the Microsoft browser and the operating system compared to the others. In any case, this data should be taken with a grain of salt. And again, Opera takes second in a category; from a cold startup it can run in just half a second. Compared to last year we’ve slightly changed how we took the measures with AppTimer, and now count the moment the window is visible and fully operative to type a URL into the search bar. This is where Firefox shows its weak point, with the startup time not improving even when running the browser for the second time. Nothing too serious, though, with its startup times still falling under one second.

It’s complicated to get reliable performance results based on a concrete benchmarking tool, as the results obtained can vary depending on the type of calculation and even the developer of the tool. Thus the best way to do this assessment is to use several sites and measures as a reference and look for common patterns.

Speed Battle is a website the logs a series of performance data for each user who visits the page and does the test, automatically compiling a ranking showing which browsers get the best results based on three evaluated factors: speed of calculation, storage, and rendering. If we go by these results, Firefox effectively destroys the competition from version 18 on, with Chrome 34 in tenth position.

To load JavaScript we’ve used two analysis tools of the many out there. According to SunSpider, it’s again Internet Explorer 11 that gets the best result, while KrakenBenchmark yields Firefox as the winner (perhaps because the tool is itself developed by Mozilla, which we mentioned last time ;-) ). PeaceKeeper, for its part, is a benchmarking tool that bases most tests on general page rendering operations and calculations with HTML5. In this case, Firefox takes the cake and Explorer trails furthest behind. Chrome has fallen mightily from being the highest scorer in 2014 to its current position in third. You can view the results of each test in this image. Obviously an analysis of these features is totally biased and limited to the features of the computer on which the tests were carried out, but even still we can draw some quite revelatory conclusions.

Comparing all the evaluated aspects, there are certain changes that concur with the general comments that each of the browsers has been receiving in recent times. While Opera used to be the humble winner (or at least the most balanced), Firefox seems to have gotten on the ball, having improved response times and beaten out its veteran rival Google Chrome in many aspects. The latter, in turn, is getting bulkier with every new version, requiring a huge amount of reserved memory to load, not to mention the alarming slowdowns it might suffer if you use half a dozen extensions that require constant synching. In fact, your correspondent has even seen a normal usage session eating up more than 500MB.

Internet Explorer is sticking to its game, and although the poor reputation of earlier versions is keeping it from garnering a big market share, it’s certainly still responding quite well in the leadup to the release of Spartan, its imminent reincarnation that will arrive with Windows 10.