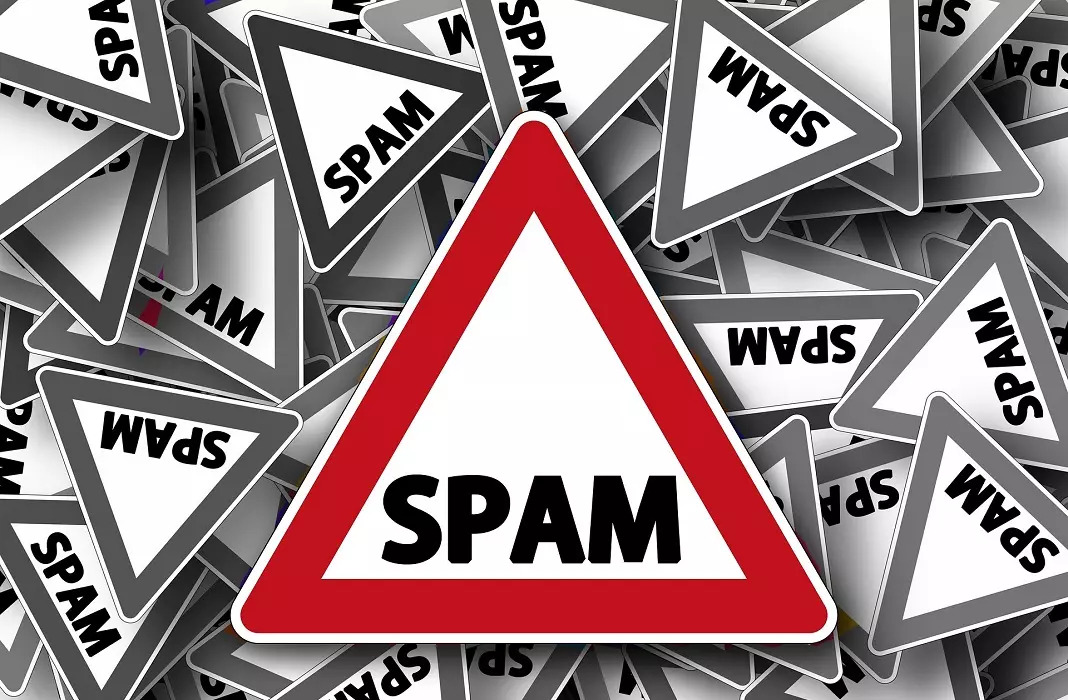 Tell me if this sounds familiar. Someone’s calling you at all hours of the day and you don’t know who it is. They wake you up in the morning, bother you when you’re in a meeting, etc. Spam calls are a nuisance and they happen all too often. You may block the number, so then they call you from a different one, or maybe it’s a different company’s turn to start pestering you. To put an end to this awful situation, we’re here to tell you how to block spam calls and forget about them for good.

There are a few different ways to block spam calls from your smartphone: using specialized apps or through the options provided on the device itself. This second option will depend on the brand of smartphone, as well as the customization layer you have.

Google doesn’t have a offer a feature that lets you block spam calls natively on Android. However, it is available on most customization layers like MIUI on Xiaomi, EMUI on Huawei and OxygenOS on OnePlus.

To find out if your smartphone has this block feature, you have to go to the phone app, tap on the three dots in the upper right corner to access the options, and look for an option that says something like “Block numbers,” “Black list,” or “Filter.” The term will change from one brand to another. Once you access this option, you can choose what you want to block.

You can go wild and block for example, all incoming calls, block all unknown numbers, or all private numbers. The phone will automatically block any call that comes from a number that’s not one of your contacts. Your device won’t ring, although you will get a notification that there was a call. 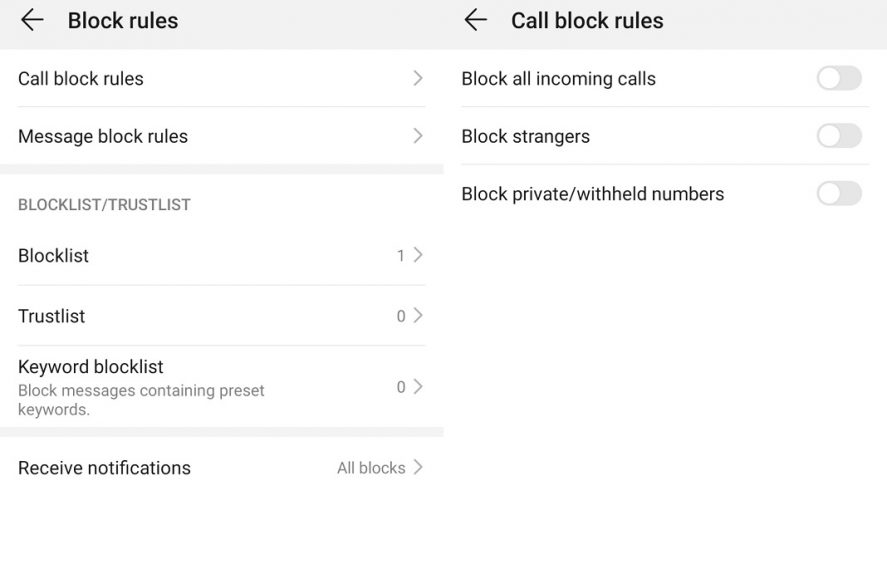 Another important option is to add the numbers you want to the black list or spam filter. That way you can put a stop to anyone who’s bothering you even if they’re in your contact list. Bye Felicia. To do this, you just have to go to the contact list on your phone, select the phone number you want to block, and tap on the three dots for the options. You’ll see the option that says something like “add to black list.” It’s also possible to do this from the Phone app on your phone. You just have to tap on the three dots, open “Filter” or “Black list” and then “add to black list.” Find the phone number you want to block and it won’t bother you ever again.

In the case of Samsung phones, you can go directly to the agenda to block whatever contact you want. It’s easy: save the number to your phone, tap on the dots for the options and select “Block contact.” If this number calls you again, there will be no way for it to get through to your phone unless you take off the block. 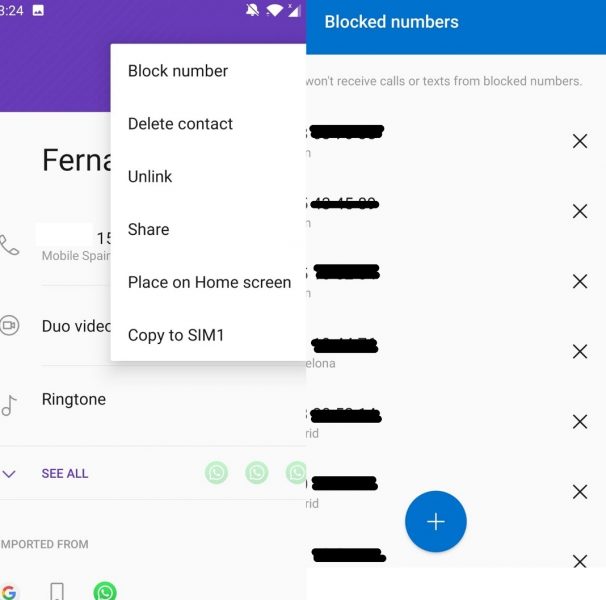 If you don’t find any similar feature in your default phone app, you may choose to install the Google Phone app. The Mountain View company has its own phone app that comes installed on only a select few phones. But that doesn’t mean you can’t use it. You can easily download the APK from Uptodwn and use it as your main phone app. You can make phone calls, manage your contacts, see your call history, and use the rest of the options and tools. But most importantly, in accordance with the topic of this post, it has a caller ID and filter that you can activate to block spam calls.

And if you don’t want to activate a spam filter but you do want to know who’s calling before picking up the call, the Google app has a call identifier for that. This app is able to tell you who’s behind the number that’s calling you, whether its in your address book or not. Even if it’s a number you’ve never seen before, Google can get the information from its own database and will tell you who’s calling or at least what type of call it is if it is in fact spam. [Download] 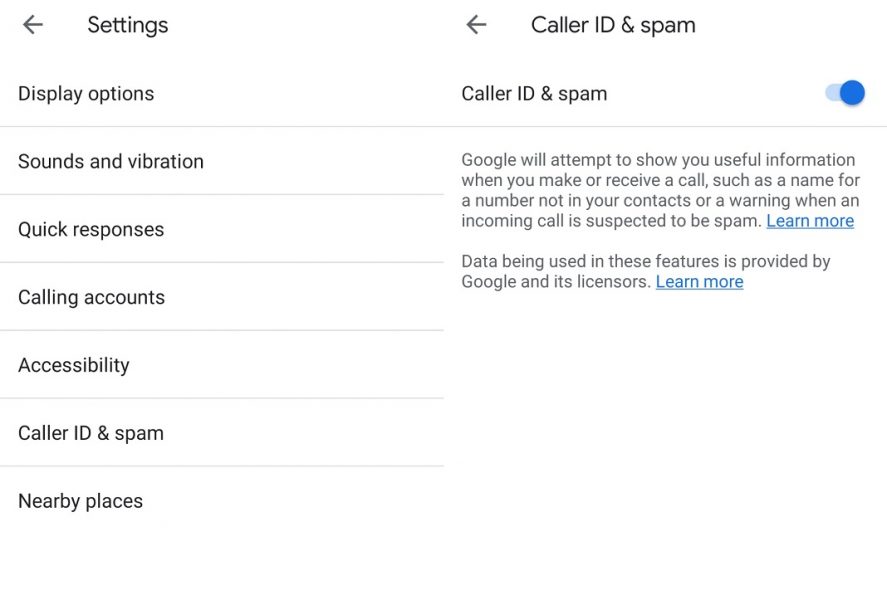 Beyond your own smartphone’s features, there’s a huge variety of specialized apps which aim to block any spam call you receive on your smartphone. Not only do they identify or block calls you mark as spam, but they also have access to databases with thousands of spam numbers that they will identify and block automatically. They tend to have a caller ID feature to tell you who’s calling. If they automatically consider it spam, the call will be blocked.

This app is one of the best ways to block spam calls on your smartphone easily and automatically. You just have to install it, grant it the necessary permissions and it’ll take care of identifying and blocking your calls for you.

It’s an incredibly comprehensive and popular app that identifies who’s calling, even if you don’t recognize the number. The app searches for the number in a huge database and shows the result on the call screen. At all times, you can decide if you want to answer the phone or not. Plus, you can block all sorts of numbers and calls so they can’t bother you ever again.

Clever Dialer is really effective and will alert you anytime you get a spam call with a warning message telling you to be careful with that phone number. From this same screen, you can block, ignore the warning, or save the number to your contacts to have it for future reference. This way, no unwanted calls will make it through. [Download]

Another one of the most used apps for blocking spam calls is TrueCaller, an app that has over 250 million users. Seriously. It works a lot like the previous one mentioned, since it’s able to identify who’s calling and filter out the numbers it considers dangerous, bothersome, or simply spam calls. It’s able to identify calls, and also automatically identify unwanted messages or SMS.

You just have to install it, grant it the usual permissions, and it’ll automatically start classifying calls as normal or spam calls. Just like the previous tools, you can also report your own numbers that are bothering you, or phone numbers that the app doesn’t have in its database already. [Download]

Call Insider identifies unknown numbers and blocks unwanted calls effectively. You just have to do the usual: install it and grant it the necessary permissions. If you receive a call from a number that’s not saved to your device, the app Call Insider will search for it in its database with 10 million phone numbers and identify if it’s spam or not. This app searches in over 70 websites dedicated to compiling specific numbers used for telemarketing or other annoyances. If you receive a call like this, the app will block it and keep it out of your hair for good.

One of the most interesting options is that it lets you see all the details about the phone number in question. You can block the call, see comments from other users, or see other people’s opinions about this number to help you figure out why it’s calling you. [Download]

Find out who’s calling with Truecaller