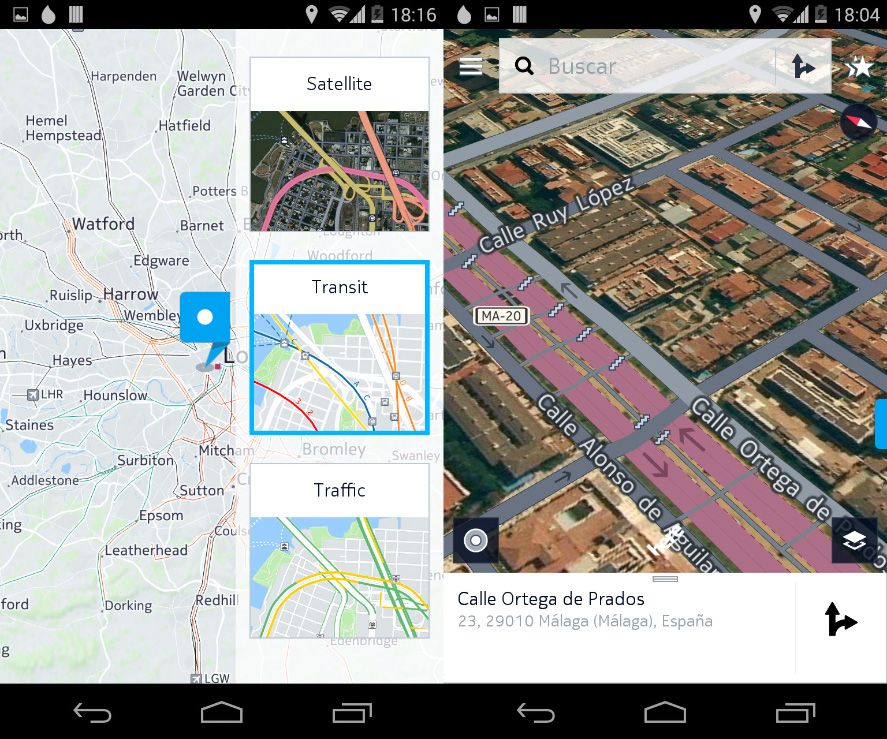 The precipitous history of the maps and travel-assistance service from Nokia has finally come to fruition with the leak of a fully functional beta for Android after having already released the iOS version two years ago, and topping off its support both for iOS devices and Windows Phone. HERE Maps aims to become an alternative to (not so much a rival of) the ubiquitous Google Maps thanks to its clean interface, a straightforward highway navigation system, and the option to download local packages with maps to access offline.

After suggesting that you optionally log in to the service via Facebook or manually add your details, you’ll be looking at the heart of the app, made up of the maps window, the upper search bar, and a drop-down menu from which you can access the different sections of the app. The maps are divided into three layers: satellite, transport, and traffic. While the transport map offers a 3D view of the buildings, they are only fully modeled and textured for certain cities like San Francisco, London, Barcelona or Berlin, among others, and you can play with the perspective and viewing angle in all cases. The traffic one, in turn, is focused on displaying current traffic conditions on flat maps using a color spectrum.

With regard to its GPS functionalities, it offers a location and navigation system using your device’s geolocation features, with real-time directions and an orienting camera accompanied by a voice that tells you which turns to make. Additional alternatives show you how to reach your destination on foot or public transport, with the option to view your estimated arrival time on the bus or metro from the line you’re on. But undoubtedly the greatest advantage of the tool is its option to work offline. One of the options in the drop-down menu allows you to download map packages for different geographical zones, whether it be an entire continent (with a correspondingly staggering use of data) or specific cities. In fact, there’s an option on the menu to make the entire app operate with no connection.

Although the essential function of the tool is that described above, it also dips a toe in the water with other services such as geolocation for nearly shops and hotels, and you can set them as your destination or rate them (in a clear attempt by the developers to “socialize” the platform). There is also a “Collections” section that resembles a bookmark system to store places of interest and organize them by category. At the moment this first beta version does not offer all its features and hasn’t even been officially launched on Google Play, but the leaked beta is fully functional and allows you to use most of its features. It comes on the heels of the already-released versions for web, Windows 8.1, and Lumia devices.