Home Tops and Comparisons The best music players for Android

One of the great things about having a smartphone, is that you also always have a music player on hand. You don’t have to take your MP3 files on a separate device since you can listen to your favorite songs right on your phone; either because you have them downloaded, or because you listen to them online. We’ve compiled a list of the best music player apps for Android so you can listen to your favorite artists on your device wherever you go.

There are two types of music players for Android. On the one hand, you have the ones that give you access to an online library and let you stream music like Apple Music and Spotify. Meanwhile, on the other hand, there are apps that let you listen to the songs you have stored locally on your smartphone. Below, you’ll find our selection of some of the best.

Some apps, like Spotify and Deezer, are mainly focused on streaming music, but they also let you listen to local music files and add them to your playlists.

The main advantage of using streaming music players is that they save you time. You just have to search for an artist or song you like, add it to a list, and listen to it whenever you want. The main downside is that you can’t always find all the songs you’re looking for. Especially if you like less popular artists. Plus, you have to pay in order to use certain features.

The main advantage of using Android music players to listen to your local songs is that you have complete control over what you hear, the level of quality, the version, and artist. However, you’ll have to find the songs ahead of time in order to listen to them.

This is the streaming music service with the most users in the world. It gives you access to a library with millions of songs, artists, and groups. You can listen to songs directly in the app without having to buy or download them. Plus, if you’re a premium user, you can use it offline so you don’t use up your data, in addition to enjoying other perks like having no ads between songs. 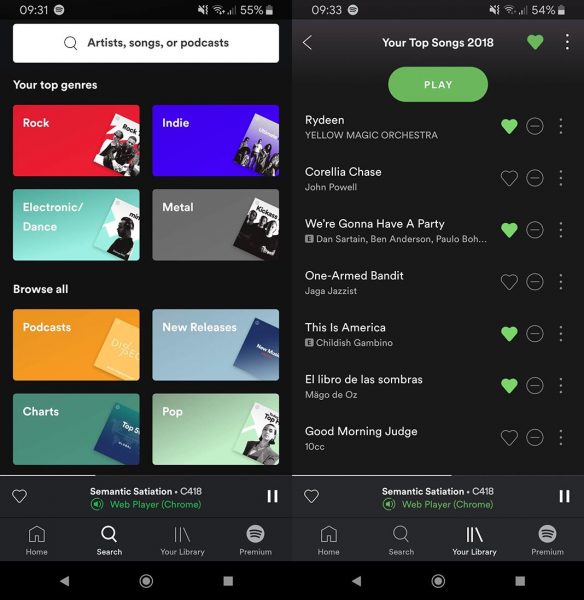 Spotify is a complete and must-have app. This app lets you make lists with your favorite songs and even discover new songs through lists created by the app: summer hits, popular music in each country, etc. And it has endless features: a timer, device sync, a car view so you’re not distracted while driving, and more. [Download] 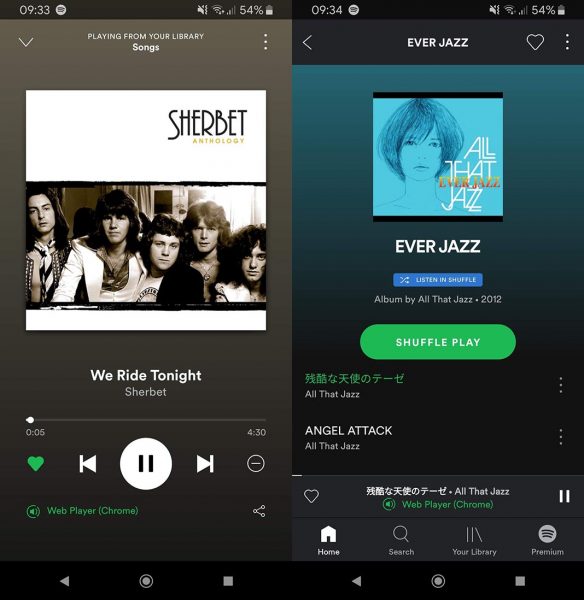 One of the biggest new apps in recent times is the app from YouTube that’s just for streaming music. The great thing about YouTube Music is that it’s not only a music player, it also lets you watch all the music videos from the Google service.

It gives you access to a catalog with millions of songs and artists, with official videos, covers, concerts, and live performances. That said, in order to enjoy the app without ads, you’ll have to pay for a Premium subscription. 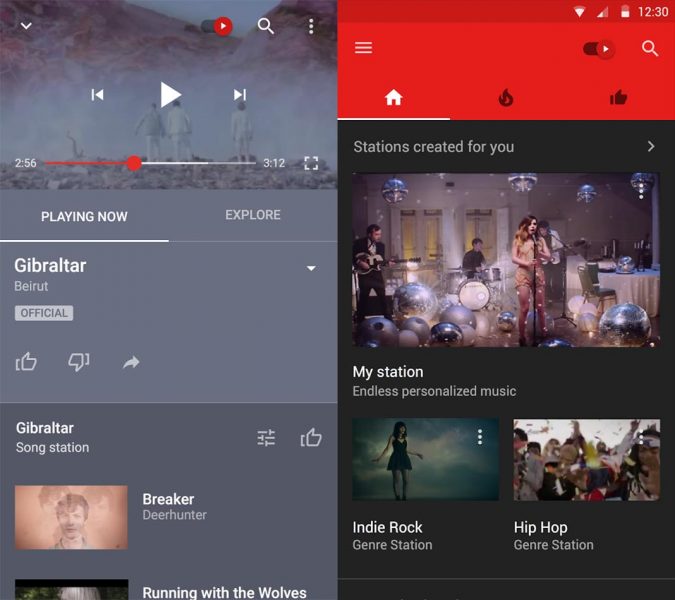 YouTube Music is a great alternative to any other music player if you don’t want to download your songs and you want to watch the music videos for your favorite songs. It’s an app that also lets you access custom lists, discover new artists and watch content without needing to be connected to the internet. [Download]

Deezer lets you listen to millions of songs for free. There are over 20 million songs available in this app which is, without a doubt, one of the best. It has an extensive catalog, a simple interface, and organization that makes Deezer one of the favorites. It’s easy to use, complete, and really useful.

In Deezer, you can search for songs in a huge catalog, add them to your playlists, and listen to them whenever you want. You can mark songs or albums as favorites and always have them on hand. That said, you have to have an internet connection in order to listen to these songs (in comparison with Spotify and YouTube Music, for example). 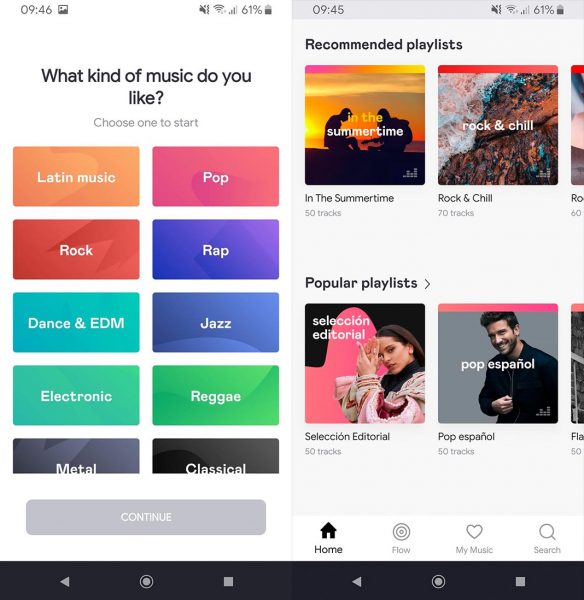 This app is a hybrid between online streaming and local content. In addition to giving you access to an enormous catalog, you can also add your own MP3 files to listen to songs that aren’t in the library. One of the advantages of Deezer is that any artist can upload music that they want people to listen to. It’s a bit more “indie” than the other apps. [Download] 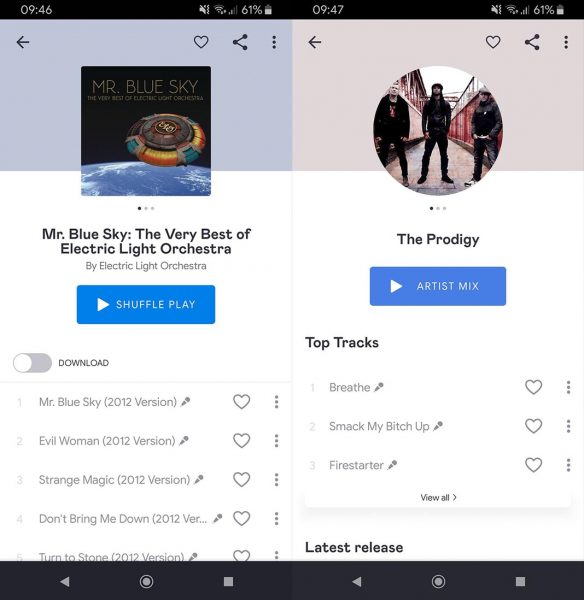 AIMP is different from the previous ones because it’s a music player for local files. It’s one of the most complete music players on Android and it has all sorts of features to help you organize your songs and groups. That said, its interface isn’t intuitive, the app is not easy to use, and it doesn’t have an attractive design. However, it is the most complete if you’re looking for the most features.

You can add songs to the AIMP library, delete them, and organize them. It’s compatible with all sorts of audio formats beyond the classic MP3 or WAV and it gives you all sorts of extra features. For example, it has a turn-off timer and the possibility to choose the playback speed and balance. It even lets you access the song lyrics to have your own karaoke sessions and add widgets to your screen so you can always control what you’re listening to. 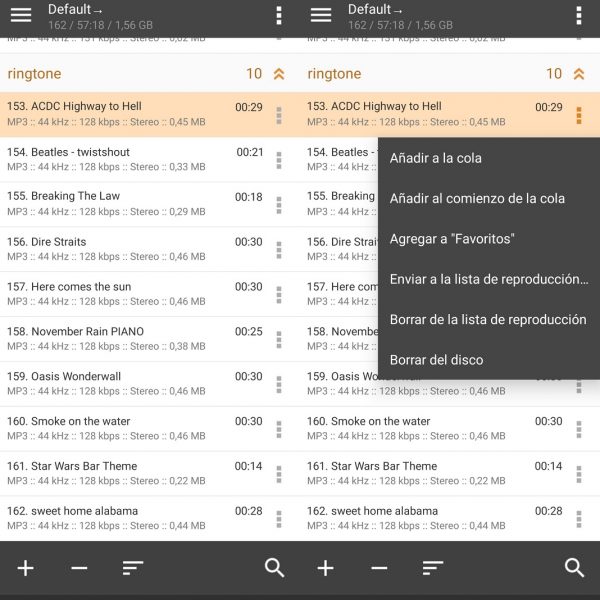 It’s an incredibly complete music player with tons of playback and customization options. Although if you’re looking for something attractive, simple, and intuitive, this is not the app for you. [Download]

The Google music player tends to come preinstalled on almost all Android smartphones so, in most cases, you don’t even have to download it. Once you have it, you just have to add all your songs and enjoy them. It also has all sorts of interesting features: adjust the quality, a shut-off timer, reduce data consumption, show album cover art, etc. It can even create mixes automatically according to your music preferences. 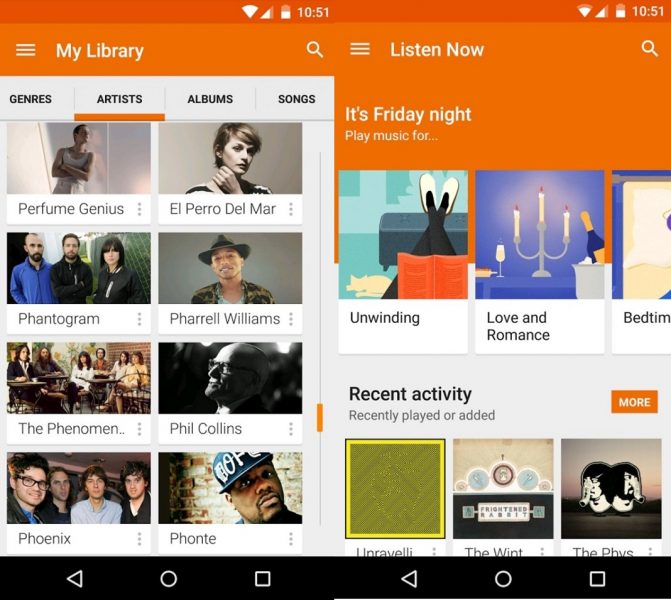 It’s free if you listen to your local songs. If want access to the streaming catalog, you’ll have to pay $9.99 a month. This will also get rid of the ads in the app. [Download] 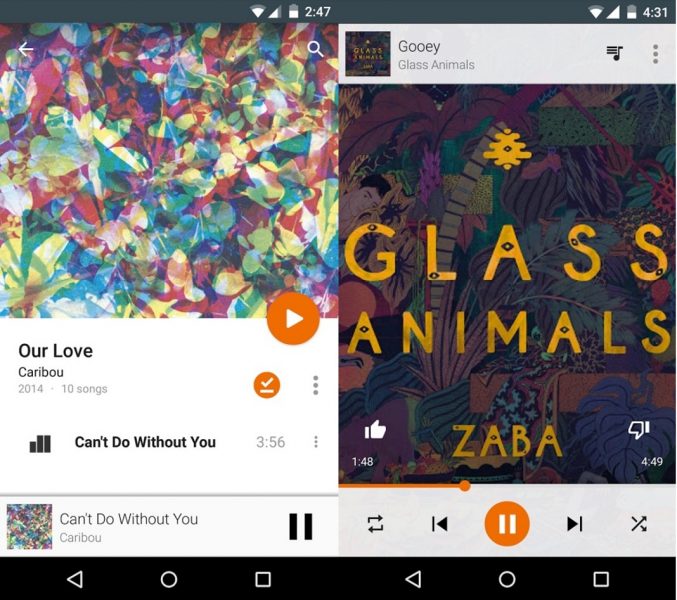 Pulsar is simple, useful and free. It’s one of the best music players for Android if you want to listen to local files. There are no ads and it lets you organize all the songs you want by album, artist, folder, genre, or song. You’ll find everything easily. And if not, it has a useful and efficient search feature.

Pulsar lets you create your own playlists with your songs, and you can also add tags or information to the albums. You can use a timer to have it turn off on its own or set your songs as an alarm or ringtone from the app. You can also leave out certain folders (like audios from WhatsApp or Telegram, for example) and adjust playback speed. [Download] 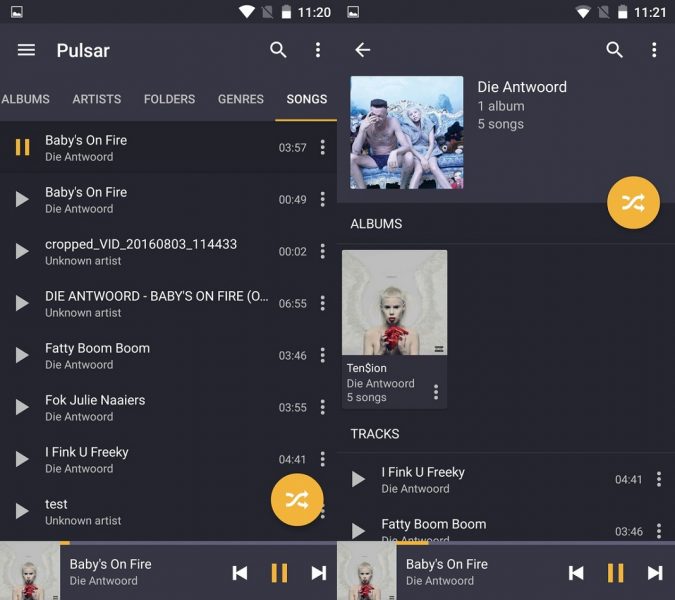