Home News and Updates Relive the famous TV show on your smartphone with Battlestar Galactica: Squadrons 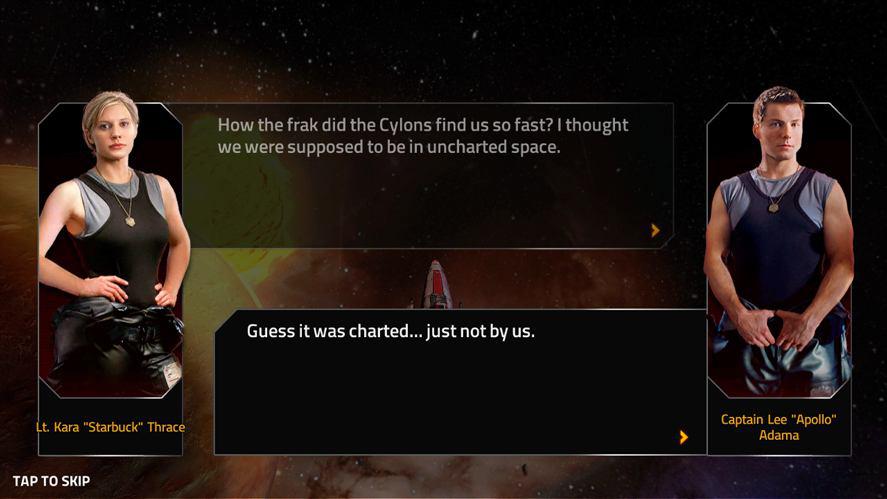 Humanity is in crisis. The Cylons are a race of robots created by human beings that threaten to destroy everything. And the worst thing is that they’re managing it. The sole hope of man lies in a fleet of ships that have survived their attacks. A bit more than 100,000 people are the last ones standing. And at the helm of this fleet is the Galactica, an obselete battleship that holds human destiny in its hands.

This is where the TV show starts and is also the opening scene in Battlestar Galactica: Squadrons, a game that follows the plot of the show in lockstep. This should excite fans of the series. But do note it’s the plot from the 21st-century remake, as the original series from the end of the 70s is a very different thing. We’re looking at a game that collects the experiences of Battlestar Galactica and moves them to Android systems. It does that the way it can be done well on this interface: by concentrating on spaceship battles. Battlestar Galactica: Squadrons is an RPG with turn-based combat where you have to destroy the Cylon ships before they destroy you. And no, it’s not going to be easy.

This game divides the action into two opposing sides. On one side you have to manage different resources to improve your battleships. There are lots of different resources, though it won’t be too tricky to get the job done. In this management mode you can also create new ships, recycle them to get more cool stuff, and also view the different available objectives. And yes, as you’ll have guessed, the objectives also give you … more resources! Though sometimes they surprise you in giving you a special ship or something. But let’s get to the heart of Battlestar Galactica: Squadrons. You have to play different missions one by one to advance in the game as well as in the plot. These follow the most traditional standards from the genre, meaning you can only do things during your turn. The good thing is that each available ship will have special powers to use: you just pick the one you want to use on each turn. Take care with this as although to start you’ll be happily flattening the ships, the battle system gets much more complicated than it seems. The number of available ships is immense and the same thing happens with your enemies.

Luckily the game has quite a clear system of advantages and disadvantages that are assigned by colors: red beats green, green beats blue, and blue beats red. Those who’ve played Pokémon should catch on quickly. There are also yellow ships that are equally balanced against the rest. When you end the battles, you’ll have different rewards and if you’re unlucky you have to face other Cylon ships that threaten to eliminate the civil ones you have. If you don’t want the number of your civil ships to decline rapidly you have to get rid of them or flee with your tail between your legs. A pretty common thing to have seen on the TV show. The “Free-to-Play” label can be applied to this title with no misgivings as you can play perfectly well without having to make any purchases, although those who want the best possible upgrades from the start can pay for them. But it’s totally optional. The game never obligates you to dish out any money nor does it bombard you with ads.

Battlestar Galactica:Squadrons is a bit repetitive. Battles and more battles that follow the same pattern with advancing difficulty as you move forward. But that doesn’t mean it’s not entertaining and it does convey the essence of the series. There are also different dialogues that immerse you in the plot and the interactions with the show’s characters. Not to mention the music, which is the same as the one Bear McReary used on TV. A pleasure for the ears.

This game will enchant fans of the series and might even make lots of others start watching it.