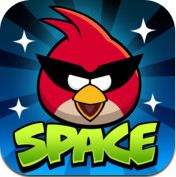 Angry Birds Space is the new and outstanding release of these amazing birds who have revolutionized the world of casual games.

They first appeared as a common and classic games featuring an stunning easiness of use and da by day they trapped us with two other games. They went to Rio and they change their look each season in Angry Birds Seasons.

Now they have decided to go to the space. That makes the game to be different, gravity plays a different role in the game and the birds have been changed.

That means we’ll have, at first, 60 new levels to enjoy launching birds to destroy constructions and pigs to defeat them. Those new levels are far different from the ones we are used to play because of the fact that we are playing in outer space.