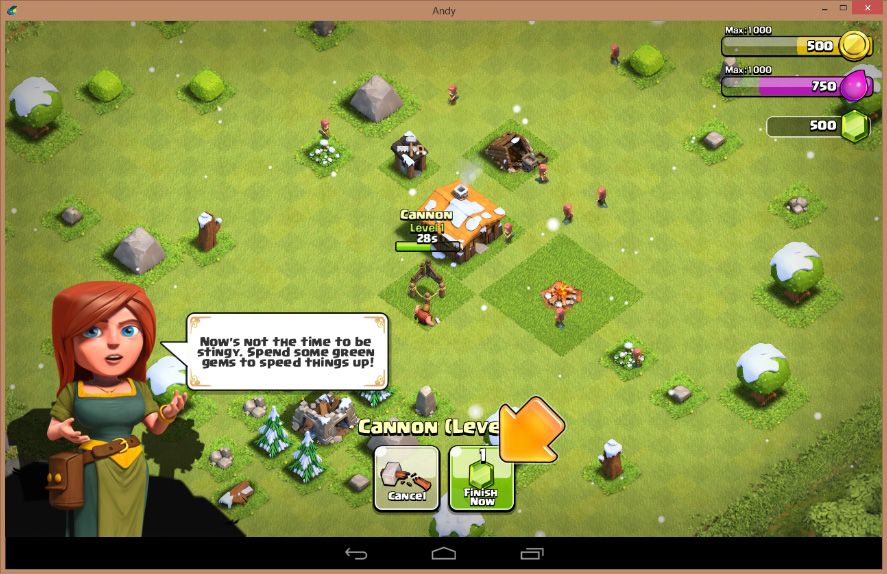 We’ve already talked here before about programs like BlueStacks for running Android apps from Windows. Andy is another alternative whose greatest asset is its fantastic ease of use: with a couple clicks it lets you use all sorts of programs designed for smartphones on your PC, from games like Clash of Clans to IM services native to mobile devices such as WhatsApp.

Andy is an Android emulator that virtualizes a custom image of the Google mobile operating system over VirtualBox, although in no case will you have to configure anything, as during the install process all the steps for installation and automatic setup are done automatically. When it’s done you’ll see the program running in the background and visible in your notifications bar with the APK-format files associated with it. When you click ‘Start Andy’ from the shortcut or the context menu that opens over the notifications icon, just as when you’re starting Android from zero, it will ask you to associate a Gmail account. You just have to keep in mind a few details during this process:

When you’re done, you’ll find yourself on the home screen of a fully functional virtualized version of Android 4.2.2 that’s preconfigured to use the Internet connection of the computer it’s running on and includes certain additional elements such as ES File Explorer or the custom ADW Launcher. Likewise, when you first start using it the apps included by default will auto-update from Google Play. The compatibility list is enormous, and you can freely navigate through Google Play and even install programs via their APK files independently, meaning the entire catalog of Uptodown is compatible with Andy. The program will also auto-rotate the screen and change the window resolution as needed for each app.

One more important point, specifically for the use of Andy with IM services, in particular WhatsApp. The latter program’s terms of use prohibit using the same account on several devices simultaneously, meaning that when you use the app on Andy, you might get a message warning you of that fact. Thus the best way to use WhatsApp on Andy is by creating a separate account associated with a different phone number from the one associated with your normal smartphone.

If you compare it side by side with BlueStacks, Andy stands out for a series of exclusive features: it grants complete access to the Android system, while BlueStacks uses a frontend that limits manipulation. Thus with Andy you can use your smartphone as a gameplay or remote control. It can also launch apps directly from the desktop and integrate your push notifications into the operating system it’s running on. And best of all, it’s 100% freeware!

Warning! The Andy Android emulator uses your PC to mine cryptocurrency